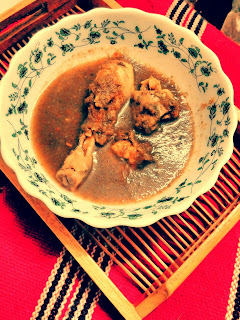 Method:
Grind the onions to a paste. Puree the tomatoes. Grind the mint and coriander leaves coarsely. In a mortar and pestle, coarsely pound the ginger, garlic and green chillies. In a heavy bottomed pan, bring the water to a boil. Add all the ingredients, except the chicken and bamboo shoots. Add salt and bring to a boil once again. Add the chicken and bamboo shoots and cook on high flame for ten minutes. Reduce the flame to sim. Cover and cook till the chicken is done. Serve hot with steamed rice, and do invite me over to slurp some!

Notes:
1) Raja Mircha (King Chilly/ Boxer Mirchi/ Naga Chilly) is rare to source and also too hot to handle for most palates. So feel free to substitute with any regular dry red chillies,
2) Bamboo Shoots are an acquired taste. Also, like Raja Mircha they are hard to find in the mainstream markets. You can easily substitute with fresh green beans or even potatoes for an equally tasty dish.