Cooks all over the world have this knack of experimenting and converting a dish to their own. Indians are no exception, and perhaps nothing exhibits this more than the very adaptable Cake! Yes, we do have our cake and eat it too!!
When the Portuguese came to India, they brought their baking skills along, and the locals took a liking to the sight, smell and taste and modified it to suit local ingredients. Today, every tea-shack boasts it own little slice!
One of the most remarkable mingling of Indian tastebuds meets foreign baking, is the Mawa Cake. The ingredients used are those of traditional Indian sweets, but the baking gives it a whole new texture and dimension! 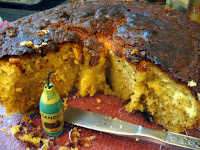 To make this cake, cream the butter and sugar till pale and fluffy. Sift all the dry ingredients together. Crumble the mawa into the butter-sugar mix and incorporate till smooth. Add the eggs slowly and keep beating till you get a smooth and homogeneous mixture. Fold in the rest and pour into greased baking tin. Pre-heat the oven to 180 C and bake for 35 minutes. Serve warm, straight out the oven :)

Protein packed Indian style pancakes....well, that's a mouthful to say! So, lets jus stick to the Indian name: Cheela.
Generally a dish found in the northern part of the country, it is similar in looks and preparation to a breakfast favorite down south! The only real difference lies in the ingredients, thus changing the taste slightly. Cheelas are quite filling and can be eaten for any meal, though the Indian tendency is to have it either as a snack or for breakfast.
Here's the ingredients you'll need to make

Method: Grind the soaked mung beans with a little water. Add the seasoning and enough water to make a batter of pouring consistency, slightly thicker than a pancake batter. 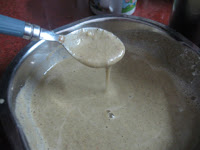 Grease a hot griddle and drop a tablespoon of batter onto it. Spread it in a circular manner, going as thin as you dare! The thinner the layer, the crisper and quicker it will cook. cover with a lid and cook till golden on one side. Flip and cover and cook the other side as well. Fold carefully and serve with chilled, plain yogurt. To really jazz it up, you could stuff it with a cottage cheese filling or a fresh veggie salad! But I love it just the way it is, straight off the griddle!

Coffee in a Cake! 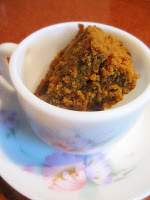 Decided to indulge the caffeine craving and my sweet tooth with a double kick of coffee cake. I found this recipe years ago in a Microwave cookbook and adopted it immediately for its simplicity and instant-ness!
So even if you are an absolute disaster in the kitchen or an impatient cook, this recipe is ideal for you. Hey, you could manage this even if you were just 10!
So lets get started on our

COFFEE CARAMEL CAKE
you will need : 125 gm butter
2 tsp vanilla
150 gm brown sugar
2 eggs
150 gm flour
30 gm custard pd
1 tsp baking pd
3 tsp coffee pd
125 ml milk
To make this cake, simply run everything in the food processor till almost double in size. Pour into a greased dish. Microwave at 60% power for 6 minutes, and again at 100% power for 3 minutes. Let it rest for 5 minutes, and then simply dig in!!

If you prefer the conventional baking, then simply bake the prepared batter in a pre-heated (180 C) oven for 35 minutes.

My house is filled with the spicy aroma of ginger. Its not winter, but gingersnaps are practically an essential at my place, given that they are mom's favorites! This weekend i decided to treat her to some freshly baked ginger delights. I found the recipe on epicurious and modified it to my pantry :D The result was crisp, warm, soul stirring treats! 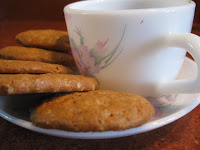 Here's how to go about makin my version of GINGERSNAPS:

And that's the end of the ingredients list. It gets easier from here :)

Cream the butter and sugar really well, till pale and fluffy. Add the rest of the ingredients and mix well. Divide into rwo small logs and wrap these logs in clingfilm. Freeze for a minimum of 24 hrs. Take out a log, slice into 1/4 inch rounds and bake in a pre-heated oven for 14 minutes. each log will give you approximately 20 cookies. Enjoy with a hot cuppa and a good book :)

When you see MASH from outside, it looks like an old forgotten 'garden restaurant'. Indeed when you enter, the decor bears testimony. But look beyond the faded rugs and scarred tables, and you see a place thrumming with the vibrance of youth.
This outdoor cafe is one of the most popular student hangouts. Seated at either the Arabesque diwans or the cafeteria like benches, you can have your fill of some of the yummiest food at really affordable prices.
The diverse menu has on offer Iranian, Chinese and Indian. But what really makes this joint a hot favourite, is their wide array of sheeshas! (Sheesha, you ask? Its another name for the hookah, the hubble bubble, the smoke water pipe...get my drift?!) For just rs. 120, you can choose any flavour and sit for an unlimited number of coal changes! Got a better deal? My pick of flavours are the cigar-pan rasna combo and the kacchi kairi-mint. Of course, you could customize your own :)
Coming back to the food, you could choose from the massive helpings of beef curry-rice, the schezwan noodles or the many fresh fruit juices. My top picks are the jujeh kebab (succulent, mildly flavoured chunks of grilled chicken), the chicken lollipop (crispy coated drumsticks), chilly paneer (spicy Chinese style cottage cheese) and the home-style french fries. And you could top it all with some sinful Chocolate Mousse (only Rs. 40!!!!) and the refreshing Iranian chai!
With jus a couple of hundred in your pocket, stop by anytime and kick your shoes off at Mash!

Sago are little pearls of starch, called Sabudana in India and often used interchangeably with Tapioca. While in most parts of the world, Sago is often dished up as a sweet, sticky pudding, India has a tastier alternative as well.
So today, my kitchen is dishing up a savoury version of sago. Or as we call it,

Ingredients you will need:

So lets start by washing the sago with boiling water. Do it a couple of times, drain and keep aside. When it swells and softens, it is ready to use!
Mix the peanut powder with the softened sago and separate the sticky sago grains as you go along. (You may have to get your hands dirty for this!)
Heat oil in a wok and throw in the cumin. When it splutters, add the green chillies and fry lightly.
Now add the sago-peanut mix and toss it all around.
Add the salt. Mix well. Lower the heat and cover.
Let it cook for 10 minutes, stirring constantly in between.
How do you know its done? Well, when the colour darkens, the grains separate and lose their stickiness, and the whole mixture leaves the side of the pan...you know you are good to go.
Jus toss in the sugar and serve piping hot!! 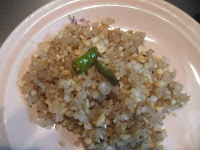 You can enjoy it with some chilled plain yogurt, or just as is. And if you wanna add a little extra punch, jus throw in a diced, boiled potato while d chillies cook and follow through the same as the above.
at 2:40:00 AM No comments:

In India, every auspicious occassion is marked with "Kucch meetha ho jaaye.." Translated it means, "Lets have something sweet!" So what better way to mark the beginning of this blog than with something sweet :)
Its my grandfather's bday and it has been far too long since I'd baked for him. But being none too friendly with eggs and chocs, and a diabetic; it is rather a daunting task to find a cake that he'd relish. Until I hit upon one of maa's ol recipes! So presenting, the 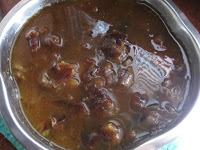 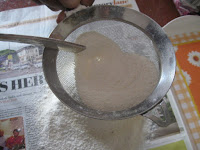 Sift all the dry ingredients together. 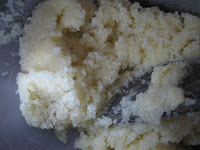 Cream the butter and sugar till pale and fluffy. 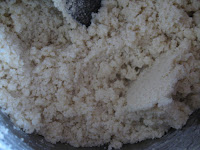 Add the dry ingredients to the batter to obtain a crumb-like texture. 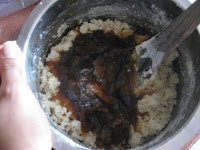 Now add the dates and the water and mix well. 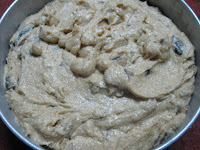 Pour into a greased and dusted cake tin. Bake for 35 minutes, and 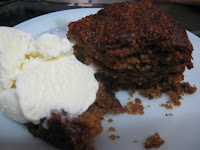 VOILA!!! Serve with a scoop of vanilla ice-cream on the side :)

Food has always been a passion. As has writing and photography. It took me 7 long years to connect the three and chomp ahead with the courage to launch my own food blog. Here i will rave and rant about food, share recipes and techniques, discuss food temptations...and in general everything with food. So is it different from other food blogs??? Maybe...Maybe not...You'll just have to keep watching this space to find out :)
at 3:28:00 AM No comments: