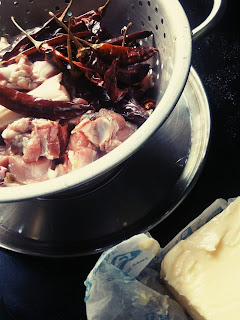 My grandfather was eighty plus when one fine day he loaded a rucksack into the back of our jeep. Picked up an old army pal of his and drove straight across the country, from the south to the north east. We had no clue where he had gone or when he would be back. A month later he returned, with a rejuvenated laugh and a twinkle in his eye. And a huge wild boar in the back. Ready to be skinned and pickled.
Shikaar! Aah! That word throws up romantic images of tough men on horseback or open jeeps, rifles slung on the shoulders, tracking the elusive beast through dense jungles. Fearless and focused. Images of late night campfires and rustic food. Smells of sweat, rum and meat mingling with the smoke and the cool night air.
I've never been on a shikaar or hunting expedition. But the vivid recollections of my father and grandfather transport me to those adrenaline fuelled times. When being true to the roots also meant being in touch with the most basic survival skills handed down by the primitive tribe.
Hunting expeditions often lasted for days and meals had to be rustic and basic. Carrying fancy ingredients was out of the question. The meat was shot fresh and the only spices used were those that would not perish in the punishing heat. Out of these expeditions was born the hunter's Junglee Maas. A one pot dish with no frills and just a wholesome meaty flavour. High on calories and protein, this was the perfect meal to energize travel weary bones and sore muscles. 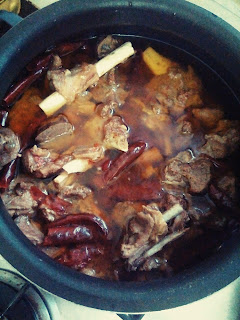 The original recipe calls for ghee, red chillies, salt and of course, meat. The resultant dish is a mildly spiced, juicy and tender meat, crowned by a flaky and crisp exterior. A contrast that delights with every bite. The gravy is thin with a buttery goodness. And if you make it under a starry sky on an open fire, the smokiness from the wood will elevate it to a whole other dimension. 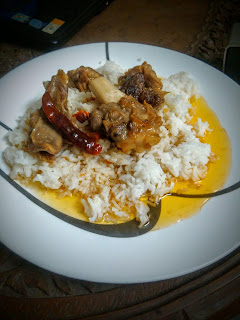 Method: Melt the ghee/butter in a deep pot. Add the meat and the red chillies and cook for a medium flame till all the pieces are generously coated with the ghee. Add the salt and just enough water to reach the level of the meat pieces. Reduce the flame and cook covered till the meat is done. Stir occasionally, adding water if the dish starts to dry. Slurp it like stew, soak it with bread or serve up with some steamed rice.